My server has been running out of space for a while and it is also 7 years old, so i decided it was about time that i bought myself a new one. I went for a quad core i5 processor, with 8GB of Corsair RAM, 8TB of Samsung Hardisks and a 40GB Corsair SSD. I had to cut all of the old harddisk and cd drives out of the Thermaltake DH-101 case. I then mounted 2 Silverstone hard disk bays into the case. I replaced all of the fans in the machine as it was too loud before. Everything was wired up and all the cables were cable tied out of the way. The machine started 1st time, the hard disks were setup in Raid5 and then Windows Server 2008 was installed on to the SSD. The machine is soo quiet and with the SSD runs really quick. I now need to transfer 3TB of data from my old server to the new 1, which is going to take 3 days.
8tb
parts
server 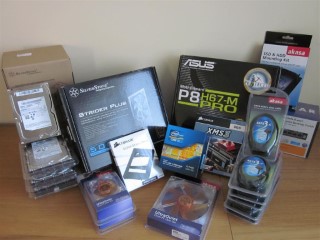 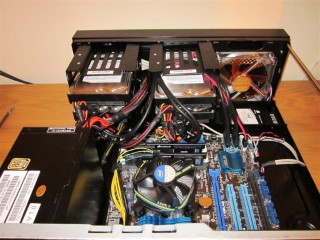