At The Start Zombie Earth May 2013

Paul, Chris, Heather, Claire, Becky, Gary and I went to Zombie Earth Leicester tonight. We didnt know what to expect and arrived in a carpark, got given a map and a start coordinate, we then had to get across town to that coordinate to get the next coordinate. When we got to the 1st location it was a multi story car park, we had to get up to the top floor without getting tagged by the zombies which are around, some of them walk slowly but other will run and chase you. We managed to get the next coordinate and make it back out with out anyone getting infected. We then had a long walk to the other side of town to Regenets college where we had to get a cone from the middle of tennis courts, which was filled with zombies. After this we went to DMU to run the gauntlet between 2 arch ways along a cobbled street filled with zombies. Finally we ended up back near the start having to run again from more zombies to the finishing point at Megazone. There was an after party, but we only had a quick drink and then left a

2013
at
earth
may
start
the
zombie 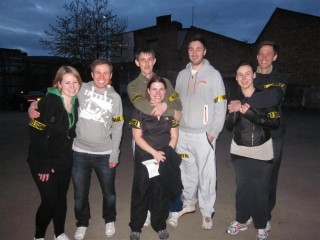 2013
at
earth
may
start
the
zombie 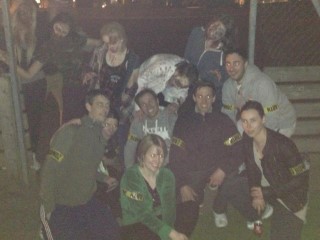 2013
after
court
earth
may
tennis
the
zombie